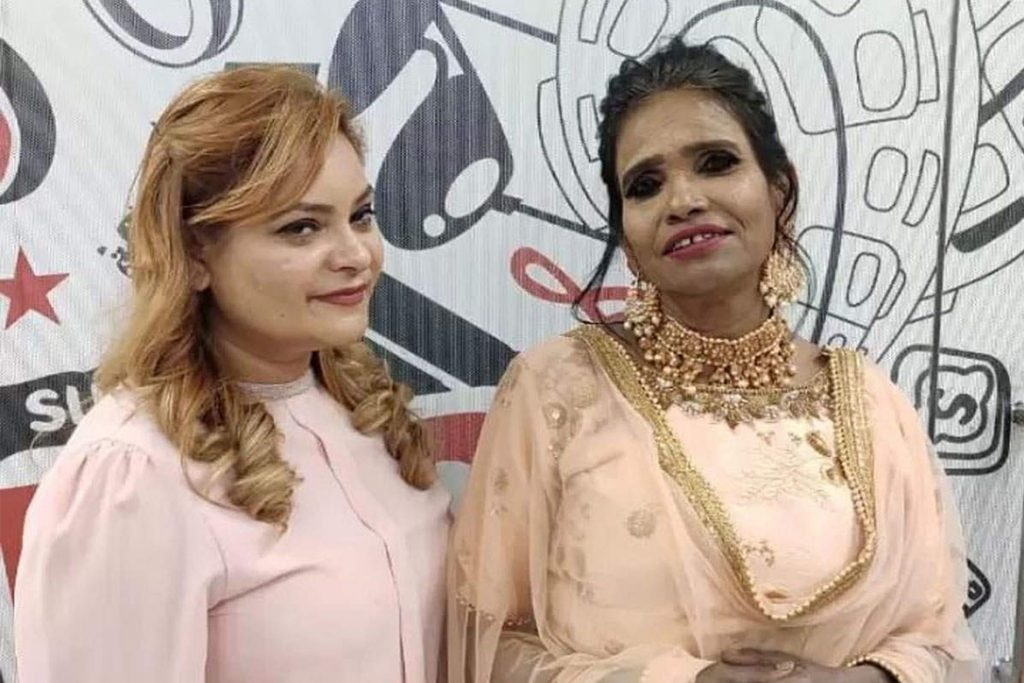 Ranu Mondal is not a new name in the music industry now. Ranu Mondal has become a household name with a video that went viral of the singer Lata Mangeshkar song ‘Ek Pyar Ka Nagma Hai’ in August 2019. Her life changed overnight when her talent became the talking buzz of the whole country for a while. Rano Mandal then known as women singing at ‘Bengal Ranaghat station’ became everyone’s favorite singing star. Featured on everyone’s WhatsApp and Instagram stories, videos went viral all over Facebook and even some made her voice as their ringtones. Like other viral videos that usually have a shelf life for a few days, Ranu Mondal’s Fame was long-lasting. Her voice touches the hearts of the millions and everyone wanted to know who she was. Rano is 59 years old and she is perfectly hitting every note that she could give Goosebumps to a top singer. It’s the magic of her voice that made everyone to appreciate her talent and bring fortune to her doorstep. Nobody could ever think that her destiny would take a turn this way.

Atindra Chakraborty is the man who shared Mandal’s video on social media and disclosed her name to the world. Ranu Mondal was from a poor background and her personal life was completely torn in bits. People want to find her daughter and publicly shamed her for abandoning her mother. Her daughter was forced to offer clarification and explanation to the strangers who were more curious to ensure justice was served even more than the victim herself. Rano Mandal’s fascinating factor ended soon. People started getting tired of minute by minute updates of what Rano was up to. From her makeovers to opportunities to record with Himesh Reshammiya, Rano’s journey seem to be just a Fairy-tale.

Things got hyped and took a worse turn when online trollers decided they don’t want to miss out on a good opportunity. Events were created which mark people safe from Ranu’s photo and videos. Memes were made on Mandal who probably had no idea whatsoever was brutally ridiculed on social media. Fans start calling her unthankful and rude. A few days ago a video of Rano Mondal yelling at fans to not touch or come near her went viral, as the video was shared over and over again. If someone touches you inappropriately or without your consent should you not speak up. This is exactly where the problem lies. After all who doesn’t like a filmi rag to riches story? People like Mandal are nothing just meat Puppets in the hands of their fans and are expected to accept whatever comes they agree with bowed heads and folded hands. The moment you retaliate to take a step which fans Don’t approve of, you will be reminded of your place and where you belong and reduced to the thing but a joke.

The new internet sensation Ranu Mondal became the talk of the town on Sunday after her picture in which she was dressed in heavy jewelry and makeup went viral on social media. Ranu decked up for an event in a gold outfit and was wearing heavy jewelry. Her face was puffed with too much Foundation while her eyes were lined with a dark line. She was wearing dark pink lipstick and a bindi to complete her look. The closer picture of Ranu has been doing the rounds of social media. And as expected, Facebook, Twitter, and Instagram were soon flooded with photoshopped images of Ranu.

People on the internet are pretty rude to her for wearing such heavy makeup. Haters even wrote criticizing her that “her makeup is much Brighter Than my future.” People should understand the fact that Ranu Mondal is not looking for the fame of fandom or she is not looking for a career in Bollywood when Himesh Reshammiya recorded a song with her. Ranu Mondal is only looking for respect, something that she is entitled to and not on the grounds of newfound Fame of stardom. W Whatever she has achieved, it is because of her destiny. People have made fun of her and even made jokes about her too. I think it’s her personal preference and we should leave her alone.