It is time for Apple fans and global music lovers to rejoice. They are about to witness a brand new event – Apple Music Awards, 2019. This first-ever attempt by Apple to create and launch a music awards came as a surprise until it was the first announcement by the Apple team. To spice things up, Apple music awards will have live performances from Billie Eilish which are streamed online on 04th of December evening at 6.30 p.m. Pacific Time.

Apple has planned to live stream the music awards event across the world through its popular streaming service ‘Apple Music’. Fans can experience the award show live from their favorite apple gadgets including the iPhone, iPad, Apple Tv or using Mac. Apple Park campus is about to hold this event at the Steve Jobs Theater. Billie Eilish, last week even invited her fans to watch her perform live at the Apple Music Awards 2019 event.

According to the music industry, this announcement from Apple music to launching its first-ever music award does not come as a surprise other than fans. Currently, Apple is trying to grab the market share in streaming platforms and related services. There has been a decline in the sales of hardware this year and Apple believes they can revive the market with its new category. One of apple’s top market competitors ‘Spotify’ has also notified about their first-ever music award which is to be held next year in March 2019 in Mexico. With this event, Apple is now trying to increase its market share in the music industry and streaming platforms. 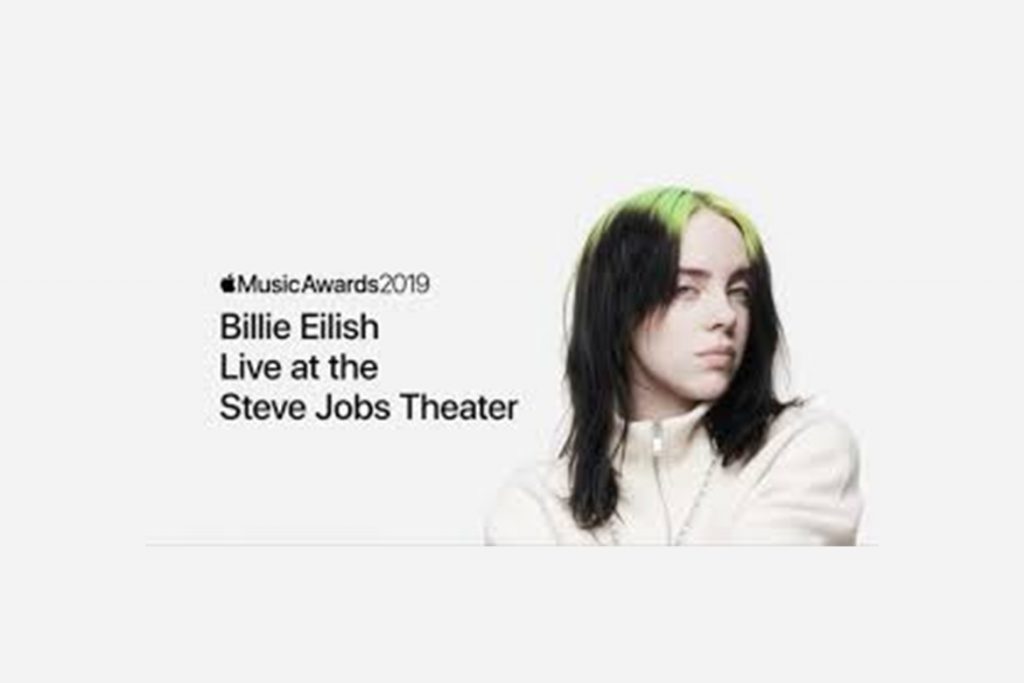 The brand ‘Apple’, known for its flagship gadgets, loves music. Though it had started with a humble beginning using its soft launch of 1000 songs in iPod and iTunes, it has now reached a stage where it launches its music awards. Apple music database is now said to have over 60 million songs and has even competed with some of the giants in the industry since it was launched. Apple claims that they have fans and subscribers from around 115 countries. The best part about apple music is that you can seamlessly stream and listen to listed songs across multiple platforms including Apple watch and Homepod.

First-ever music awards from Apple will honor top musicians of the year in five categories. The best musicians for the year 2019 were selected based on their editorial perspective in addition to the popularity they have gained from music fans across the world. The numbers from their streaming database matter the most and it is reflected in the selection panels too.

Artist of the Year: The first category, Global Artist of the Year, has been awarded to Billie Eilish, the boldest musician and a global phenomenon of 2019. Her debut album named “when we fall asleep, where do we go?” is a huge hit and topped the apple music charts of the year. Billie Eilish has now become a global icon and she is performing live at the music award event at the Apple Park on Nov 04, 2019.

Breakthrough Artist of the Year: This award has been honored to the rapper and the daring musician ‘Lizzo’. She has been added to the list for the most popular album ‘Cuz I love You’. The editorial team picked her for this category because she managed to change the overall definition of pop stardom. She is bold and does not believe in being humble. Her song on ‘Self-love’ is the biggest hit and considered a breakthrough for her to receive this ‘Album of the Year’ award.

Song of the Year: According to Lil Nas X, what he all needed was to create a song that defines the meme culture. He worked on the idea into a catchy song that can appeal to the larger music audience. His ‘Oldtown Road’ was a sensation and also the most-streamed song of the year. With this, he made history and now getting honored in Apple Music Awards in the first ‘Song of the Year’ Category.

Apple gadgets are uniquely designed and we all know it. Imagine an award from the same brand and it will be truly unique as well. The first-ever award has been designed in a creative way formed of the customized silicon wafer, around 12 inches, in the middle surrounded by a glass sheet placed inside the anodized aluminum body. The interesting part of the custom silicon wafer according to apple is that it is not an ordinary chip but exactly a chip that is used in Apple’s music devices. The chip in this music award also holds plenty of intricate design details within it. This distinctive design has already garnered all its attention among the fans for its stunning finish and look.

The music awards were chosen for the boldest of the musicians who had broken all the barriers and existing norms in provided categories yet made with most humans. The awardees of the first-ever Apple music awards truly inspire the world of Apple customers with their deep sense of music and passion. According to the official press statement from Apple they said, “We couldn’t be more excited to celebrate them”. Billie Eilish gets the huge honor in getting the first year ‘Global Artist of the Year’ along with her stunning performance in the live event.

You May Also Read: Famous People Who Died Without You Knowing

‘Guddu Bhaiya’ Is Back In Action: Mirzapur-2 Is Receiving Overwhelming Response From...

Kohli Becomes The Second Batsman In IPL To Hit 500 Fours

Why Vijay Sethupathi Pulls Out Of Muralitharan’s Biopic?