Union Minister of women and child development Smriti Irani has once again won the heart of Instagram fans and followers. Smriti Irani posted up a picture with the co-founder of Microsoft Bill Gates, having some conversation with him. Smriti Rani has always been trolled over her educational qualification, mentioned in her pole affidavit that she has not completed her graduation from Delhi University, whereas on the other hand Bill Gates the world’s richest person is also a college dropout.
After sharing the picture on the social media platform the picture received 66000 likes in just a few hours, and many others praised her sense of humor through her comments. One of her fans wrote, ‘jhakas’ every time you put a post. Another fan said, ‘what a response to the trolls big fan of you mam.’ 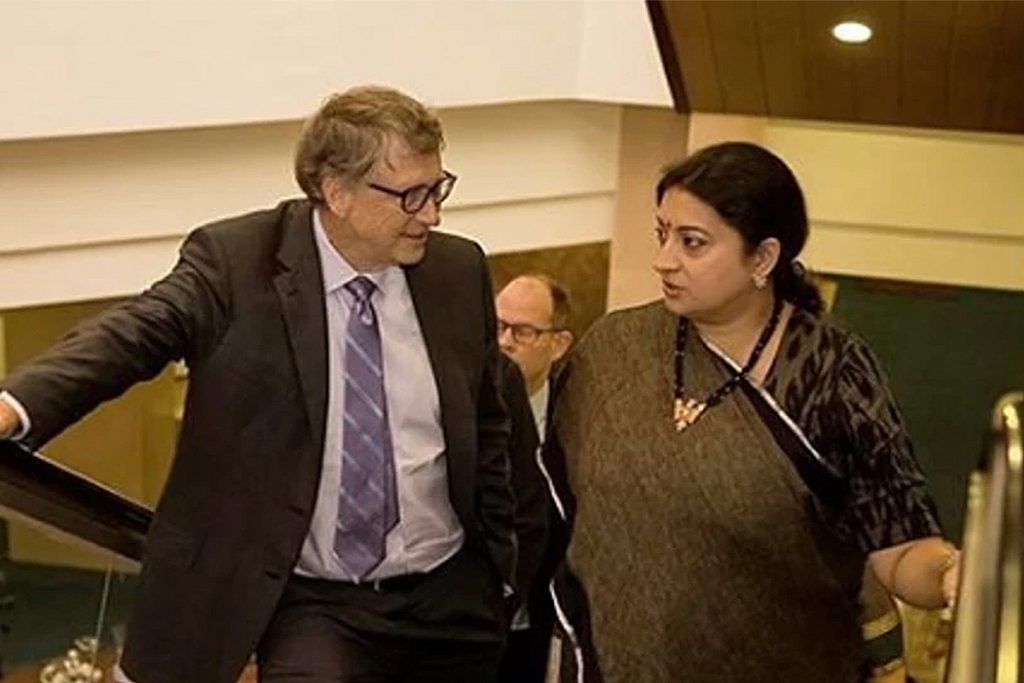 Smriti Irani is always considered as an Instagram queen. Thanks to her hilarious sense of humor and the posts she made on her account. Among all her posts, her most liked one was on Diwali mithai, in which she shared a funny video clip of Shahrukh Khan and Kajol’s blockbuster movie Baazigar to show their relationship with sweets on the festive season. Another post was Smriti Irani shared a picture of herself laughing out loud and explaining the reason for being thankful. The funny caption and comment to that post left too many people laughing out.
In another Instagram post, the minister posted a video of journalist Arnab Go swami, where he can be heard shouting, ‘where were you?’ at a journalist, on which Smriti Irani gave funny caption reads, ‘when you mummify Arnab’.
Bill Gates was in Delhi on November 18th, where he, along with Smriti Irani launched the Bharatiya Poshan Krishi Kosh, an initiative whose aim is to increase the nutritional value of more than 100 crops while eliminating the hunger by 2030 across the world. Sharing the photo Smriti Irani wrote, ‘soch rahe hain padhaai Puri Kari Nahin aage kya Karen’, (wondering what to do next since both of us did not complete our studies). Smriti Irani further added that “this is a unique occasion where such a big personality is on the same platform as farmers and civil society members, to promote a revolution that will bring together the nutritional needs of the citizens with India’s cropping patterns and cultural production”.
Irani’s is close friend and television producer Ekta Kapoor could not stop laughing and commented, ‘Boss, Tulsi Kyunki Abhi Bhi Yad hai please Wapas Karen’ (Boss, we still remember Tulsi of Kyunki please give it back). Mrs. Irani is very active on social media and the Union Minister has over 700000 followers on Instagram.
The Union Ministers keep sharing hilarious memes and adorable posts on her social media account. Recently, Smriti Irani shared a funny post featuring Minion on her instagram stories and the lines after reading it were, “Legend says that when you can’t sleep it’s because you are awake in someone’s dream, so if everyone could stop dreaming about me that would be great.” The minister knows how to turn a normal situation into comical.
Multi-millionaire Bill Gates was also a college dropout of Harvard at the age of 20. Just two years into his college, he started his own Tech company ‘Microsoft’ and the business that made him multimillionaire by the age of 26. On the other hand, Smriti Irani was also a college dropout who had a successful career, first as a television actor and then as a politician.

A paranormal expert claims that he talked to Sushant’ soul